Promoter of the 042 Soccer Legends Platform, Chikelue Iloenyosi has declared that the forum is not one that would reach out to only Enugu soccer legends.

Iloenyosi who is still basking in the euphoria of the support the Platform is enjoying from stakeholders said 042 would have a global face.

“We would be willing to help soccer legends from different parts of the country and beyond…in fact it would be global because football is a game that unites people irrespective of color, race and religion. We would not discriminate in 042. We will support whoever writes us,” Iloenyosi said.

Interesting, the Platform is receiving endorsement from outside the country with the President of Guinea Bissau soccer federation, Manuel Nascimento Lopes lauding it. 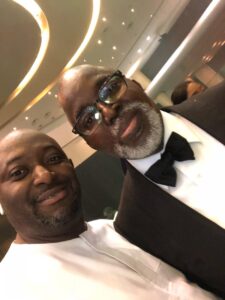 Lopes in a statement sent to Iloenyosi described his efforts as commendable, even as he charged him not to relent.

It would be noted that the likes of Kanu Nwankwo, Dan Amokachi, Austin Jay Jay Okocha, Ogenyi Onazi have thrown their weight behind O42 with NFF president Amaju Melvin Pinnick declaring that the soccer federation would also support it.