The Minister of Youth and Sports Development Mr. Sunday Dare Wednesday signed a Memorandum of Understanding on behalf of the Ministry for adopted Nigerian wrestler Odunayo Adekuroye, with her adoptors, Halogen Company. 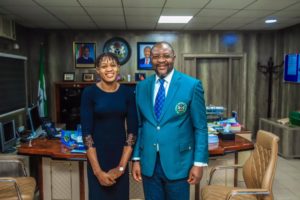 Speaking at the brief event, the Minister said he was impressed with the level of her preparations for the Tokyo Olympics and expressed optimism that she would bring back gold from the world event. He also donated kits to the wrestler to aid her preparations.

Adekuroye while promising to work hard to make Nigeria proud at the Tokyo Olympics, also expressed gratitude to the Minister and Halogen Company with a promise not to let them down.

“The Minister is more like a father to me. He is doing what a father should do for a daughter and I have nothing to give to him but I promise to make him proud. No competition is easy. We are trained to wrestle and we will do just that.

“I also want to thank Halogen Company. Three entities wanted to adopt me at first but the spirit of the Lord led the Minister to give me to Halogen. My coach too who has been working very hard, I promise to make them all proud.”

Immediately after the signing of the MoU, Halogen Company credited the account of the wrestler as is done with any adopted athlete under the Adopt an Athlete Initiative.

The Adopt an Athlete Initiative, a brainchild of the Minister of Youth and Sports Development, sees athletes get adopted by charitable individuals and corporate organizations with a view to providing support for the athletes’ training for the Tokyo 2020 Olympics.