From Athan Agbakwuru, Port Harcourt
A Rivers State High Court sitting in Port Harcourt and presided over by Hon Justice F.A Fiberesima has ordered one Ahmed Aigbona and Mike Oboh from parading themselves as president and secretary respectively of the Sports Writers Association of Nigeria (SWAN).
The judge after hearing a motion exparte brought for determination before the honourable court, granted an interim order of injunction restraining all the defendants, their members, privies, servants or however so-called from parading or presenting the 1st set of defendants to the public as the national president, secretary and NEC members of the Sports Writers Association of Nigeria (SWAN) pending the determination of the substantive Motion for Injunction by the court.
Listed, as defendants are Ahmed Aigbona, Mike Oboh, and Idris Abdulraham.
The matter has been adjourned to March 24, 2020 for all pending motions and hearing of the originating summons. 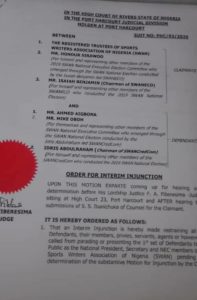