Facebook Twitter LinkedIn Pocket WhatsApp Telegram Share via Email
The Bayelsa State government on Monday lamented the decline in revenues accruing from the federation account while announcing its income and expenditure profile for the months of August, September and October 2020.
Presenting a breakdown of the figures in Yenagoa, the Commissioner for Finance, Mr. Maxwell Ebibai, disclosed that the state received a gross inflow of N12.8 billion for August.
He explained that the amount consists of statutory allocation of N3.14 billion, derivation N8.8 billion, VAT N1.97 billion, refund for Pay As You Earn (PAYE) N636 million.
Mr Ebibai also noted that deductions from the Federation Allocation Accounts Committee (FAAC) was N1.007 comprising foreign loans to the state while  federal government recovery was N42.171 million, restructured commercial loan N741.156 million among others.
The commissioner, who announced N463.9 million as IGR receipt for July 2020, also remarked that funds from other sources stood at N500 million.
He said total receipts from FAAC excluding the deductions at source amounted to  N11.8 billion, including the IGR for July, which brought the total receipts to N13.159 billion.
For September, the Finance Commissioner stated that N10.285 billion was recorded as gross inflow, including statutory allocation of N2.981 billion, derivation N6.030 billion and  Value Added Tax N1.27 billion.
Ebibai also announced N1.952 billion as total deductions from FAAC, noting that judging from the deductions at source from the month of August, the total deductions for September was significantly higher by N933 million.
He said the state recorded a sharp drop in its revenue from the federation account owing to two major factors.
He explained that the state had received federal government grant for security purposes in 2012 but started making refunds on it in  September 2020 coupled with deductions at source on revenues due the state from the disputed oil wells between Bayelsa and Rivers states.
He said after the total deductions of N1.952 billion from FAAC, the state was left with a net balance of N8.333 billion as against that of the month of August which was N11.8 billion.
Ebibai further explained that the state government recorded total receipts of N1.49 billion in August  and had to source for funds of N2 billlion due to the shortfall in revenue the previous month.
He said the net funds available for the state came up to N11.382 billion while the state’s total expenditure was N7.2 billion.
The Finanace Commissioner noted that the expenditure among other components  include civil servants salaries of N3.9 billion, gratuity N150 million, while N173.5 million  was spent as salaries for political appointees.
Ebibai pointed out that Governor  Douye Diri had been consistent in the payment of gratuities to pensioners despite the state’s financial constraints and assured that it would sustain the payment until the backlog is cleared.
He added that recurrent and capital expenditure gulped N4.140 billion leaving a balance  of N26.560 million while it recorded a closing balance of N995 million in September.
For October, the Finance Commissioner reported that the state got a gross inflow of N10.2 billion, comprising statutory allocation of N1.9 billion, derivation N3.8 billion, Value Added Tax N1.2 billion and forex equilisation fund of N1.9 billion.
He said total deductions at source stood at N1.9 billion, which included foreign loans to the state and federal government recovery while commercial agriculture credit scheme and other items gulped N939.8 million.
Ebibai also announced that the state had a net figure of N8.2 billion with an internally generated revenue of N839 million, a receipt of N1 billion for COVID-19 and total other receipts of N1.839 billion.
He said the net FAAC receipts in addition to other receipts amounted to N10.50 billion.
Giving a breakdown on the outflows, Ebibai disclosed that the government made total payments of N6.452 billion out of which it made loans repayment of N870.6 million and minimum wage arrears N50 million.
Others are gratuity N150 million, grants to higher institutions N846.6 million, civil servants salaries N3.9 billion, political appointees salaries N201.7 million and salary arrears N130.5 million leaving a net balance of N3.9 billion.
He reported that total recurrent and capital payments gulped N4.3 billion leaving a deficit balance of N707 million.
He noted that the balance brought forward from September was N995 million out of which the state had a closing balance of N288.7 million.
Show More
Share
Facebook Twitter LinkedIn Pocket WhatsApp Telegram Share via Email Print 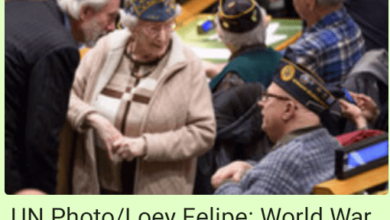 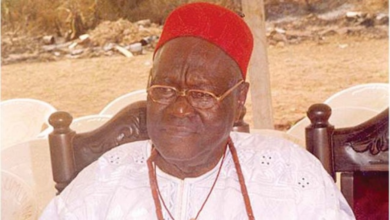 Ochei commiserates with the Ikpo Family 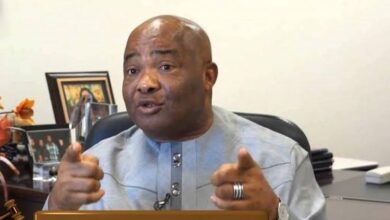 Uzodimma imposes dusk to dawn curfew at Orlu over insecurity 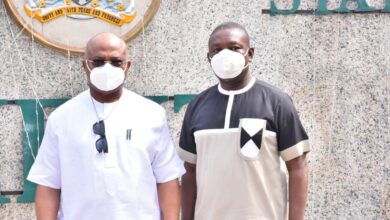