Egbe while praying for good health, long life and divine protection for the Enyimba chairman described Anyansi as a gifted soccer buff and an asset to Nigerian football.

“Anyansi in the last two decades or so has shown that he is a football manager per excellence. I have worked closely with him…he is gifted and one other thing going for him is his humility. I pray that God will continue to bless and keep him. As a nation, we need to use Anyansi more. We need to project him and make him play a bigger role for Nigeria at the international soccer scene. Anyansi is also one Nigerian the federation government must also recognize and honor, given what he has achieved with Enyimba which is today Nigeria’s most reliable and consistent club,” Egbe said. 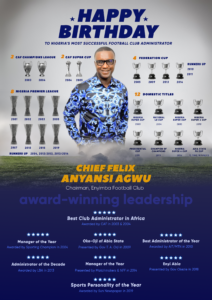 Anyansi it would be noted led Enyimba to lift the CAF Champions League back to back in 2003 and 2004. Under him, the People’s Elephants also won the Africa Super Cup. Anyansi remains the country’s most success club football manager, a feat that has seen him win several awards.