By George Aluo
Chief Executive Officer of Monimichelle, Ebi Egbe has moved to support Enyimba ahead of their all -important home clash against Moroccan side, Hassania Agadir in the CAF Confederation Cup billed for this weekend.
Enyimba would need a win to brighten their chances of coming out of the group stage and qualifying for the quarterfinals of the tournament.
Egbe whose outfit constructed the Enyimba Stadium turf disclosed yesterday that he would as usual move in to maintain the turf at no cost to the club, even as he further disclosed that he would also be fixing a brand new goalpost net for the game against Agadir.
“Monimichelle would carry out free maintenance of the Enyimba turf before the game against Agadir and we are also going to fix a brand new goalpost net for the game. This is our own little way of supporting the club as they battle to do Nigeria proud in the continent,” Egbe said.
Egbe tipped Enyimba to go far in the tournament insisting that the club’s new head coach, Fatai Osho has what it takes to deliver. He was quick to add that the club has got in Felix Anyansi Agwu, a chairman who stops at nothing to get result. 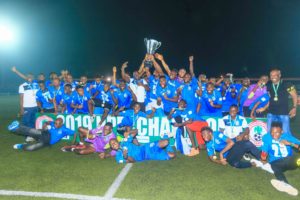 “Enyimba would beat Agadir in Aba and I see them going far in the tournament. Osho, their new manager is a youthful coach that is eager to prove a point and Anyansi on his part is a man that puts in everything to get result,” Egbe said.