Facebook Twitter LinkedIn Pocket WhatsApp Telegram Share via Email
Youth and Sports Development Minister Mr. Sunday Dare has expressed deep shock over the death of athletics coach Adu Uruemu, describing it as a huge loss to Nigeria and the atheletics family.
According to Dare, “I received the news of the death of Adu with great shock and pain. He was so committed to the development of notable athletes and his death has left a big vacuum that would be difficult to fill. My condolences goes to his family and daughter. May his soul rest in peace”.
In her tribute, Mrs Maria Worphil said his death is very sad and a huge loss to athletics.”Adu’s death is very sad, but we cannot question God. He was such a dedicated, reliable and organized coach. He was also a gentleman. We shall miss him, but God knows best. 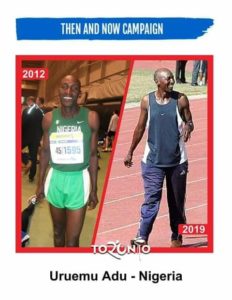 Mary Onyali described him as a grassroot coach who was responsible for the discovery of so many talents like U.S based Ruth Usoro. “His death is a big setback for athletics because he was such a loyal and  trustworthy person. I am personally saddened by his death because he was so  dedicated to athletics.”
Secretary General of the Athletics Federation of Nigeria Niyi Beyioku said, “Sad and unfortunate for athletics. He was such an influencial coach among  the athletes. May God grant him eternal rest.”
Leonie Etong from Cameroun said ” We have lost a gem. May God Almighty grant him eternal rest and be with the family he left behind.”
Cassien Ntahimpera from Burundi said, “Adu, our friend just left us. It is really sad. He was a dynamic, courageous and organized man. On behalf of the Association of Burudian  Veteran Athletes, and AFM in particular, we offer our sincere condolences to the family.”
Before his death, Adu was the Head Coach of the Arena Athletics Academy , Chairman of the Africa Masters Athletics. He had also worked as a coach with the Plateau State Sports Council.
He was born on 3rd August 1965.
May 11, 2020
0 7 1 minute read
Facebook Twitter LinkedIn Pocket WhatsApp Telegram Share via Email
Show More
Share
Facebook Twitter LinkedIn Pocket WhatsApp Telegram Share via Email Print