By George Aluo
Organizers of the Gov Akinwumi Ambode ‘thank you’ game tagged Africa X1 versus Naija Legends have secured the consent of Liberia President, George Opong Weah for the event billed for March 15, 2019 at the Onikan Stadium.
A top official of The Match International, Waidi Akanni who alongside former Super Eagles coach Samson Siasia paid a courtesy call on Weah early this week disclosed yesterday that the Liberian number one citizen accepted to be in Lagos for the game.
“As we speak, we are in Monrovia and the good news is that Weah accepted to be in Lagos for the match which we are playing to honor Gov Akinwumi Ambode. We had breakfast with President Weah who despite being President has continued to identify with his primary constituency…football,” Akanni said. 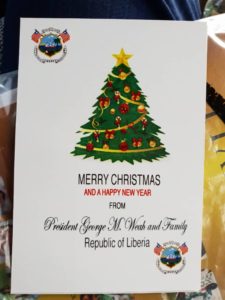 Akanni said with the coast now clear, The Match International would next week unveil President Weah’s jersey for the game which has been endorsed by the likes of Didier Drogba, Kolo Toure and Super Eagles China based striker Odion Ighalo.
“Having secured the consent of President Weah, we would next week unveil his jersey and unfold to the public all the other arrangements we are putting in place ahead of the big show. We are particularly grateful to the duo of Mr Wilson Nyanneh and Momo Opa Sekout for their support here in Monrovia.
Interestingly, President Weah had after being presented with his Ambode match jersey
sent a special Christmas Card to Gov Ambode.