A couple of former Nigerian international players have lambasted former defender Taribo West over his infantile remarks against the leadership of the Nigeria Football Federation, including his statement that Nigerian Football is ‘sinking’, which they dismissed as ‘silly’.

Former utility player Pascal Patrick, who was in Nigeria’s 1996 Olympic gold medal –winning U23 squad and is presently Co-ordinator of the Super Eagles as well as Chairman of the Bauchi State Football Association, lashed West as “irrational” and failing to bring any statistics to the table to support his “silly remarks” about the state of Nigerian Football.

“What I know and remember is that this year, Nigeria finished third from the biggest-ever AFCON championship in history (involving 24 teams) and Nigerians are excited about a young and strong team that almost defeated Brazil in a friendly match and looks very promising for the future.

On his part, former defender Chikelue Iloenyosi described Taribo West’s comments as the “ranting of a disgruntled fellow.” 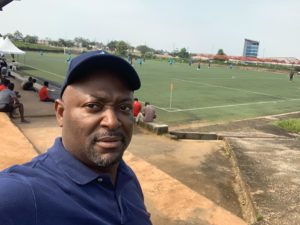 “We are aware of a small group of disgruntled fellows and scandal-mongers to which West now belongs, so we are not surprised. Nigeria has finished this year ranked 31st in the world – the highest for a very long time.

“Nigeria won gold and silver in the football event of the African Games in Morocco. Even the losses of the Falcons and the U23 boys in the Olympics race were near misses, as the Falcons only lost out on the away goal rule and the U23 boys lost only one match by the odd penalty goal at the U23 AFCON in Egypt.

“Taribo West was appointed to coordinate the 1994 Super Eagles that were honoured by the NFF at the AITEO-NFF Awards earlier this year even though he was only on the fringes and was not in the winning team. We remember how he praised the NFF at the Awards. Now that he has joined those creating a toxic environment, Nigerian Football is ‘sinking’ in his blurred eyes.”

Iloenyosi stated that any former Nigerian international joining the band of detractors to poison the same football environment from which they all benefitted should be ashamed of himself.

“It is a shame for Taribo West to join this negative group. They are not helping Nigerian Football in any way. Despite all their actions and noise, the Nigeria game holds great promises for the near future. Even the Golden Eaglets that lost out in the second round of the FIFA World Cup remains the youngest we have ever presented at that level and they will do very well in their careers and for the senior teams in the near future.

“Our responsibility is to provide support and encouragement for those who are in leadership positions and to advice them on certain policies if we see they are going wrong. Not to descend to the level of teaming up with negative and destructive opposition groups.”