Photo: Land agents on the training pitch
By George Aluo
Heartland FC Owerri that has been immersed in a bitter management crisis faced more trouble this morning as players and officials of the club were sacked from their Naze camp on the outskirts of Owerri. 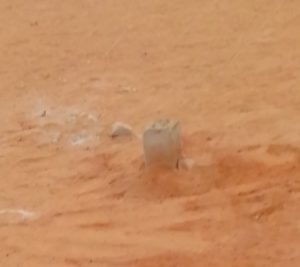 Competent camp sources said the real owners of the camp way back in the Iwuanyanwu Nationale era have taken possession of the place and ordered the players out.
According to our source, the players who were not part of the team that left for Yola this morning to keep an NPFL league date with Adamawa United could not train at the Naze camp as surveyors were busy partitioning the field that they train on for a housing project.
” As we speak, our team left for Yola this morning. But those of us who didn’t make the team were supposed to train in our camp. We came out to train only to see that the pitch has been marked by surveyors possibly for a housing project. We gathered that this camp over the years has not been acquired by the state government, owners of Heartland FC,” our source said.
Our source further disclosed that the team is now searching for an alternative training ground possibly at the nearby Federal Polytechnic Nekede, Owerri.
Efforts made by newstap.com.ng to speak to the interim chairman of club, Babatunde Ezekwem proved abortive as calls put across to him didn’t go through.
The Chief Press Secretary (CPS) to Imo State governor, Oguwike Nwachukwu could also not be reached.
Imo governor, Hope Uzodinma had only last week assured the club of total support when he met the players after the home victory over Sunshine of Akure.