About 60 golfers convened on Benin City, Edo State Capital last weekend to celebrate one of their own, the State Deputy Governor, Rt. Hon. Comrade Philip Shaibu.
The ebullient Deputy Governor, an alumnus of the University of Jos and University of Benin clocked 49 last week. The Ikoyi Golf Club came with the highest contingent led by its Captain Brig-General Mao Amalegbe who was accompanied by his wife. 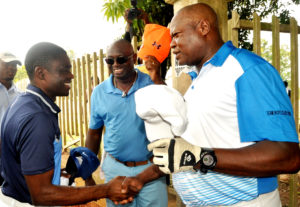 The tournament was rounded off with a dinner where various prizes were given to winners.
Meanwhile, Shaibu, a devout Catholic has already activated Christmas mood at the Edo Government House when he hosted the festival of Nine Lessons and Carol.
Shaibu during the Carol prayers for peace not just in Edo State but the country at large, even as he urged Nigerians to show love to one another.