Former Super Eagles defence strongman, Chikelue Iloenyosi has given a pat on the back to sports minister, Sunday Dare for identifying with the nation’s ex-internationals.

Iloenyosi while lauding the sports minister said he is also floating a platform that would bring more succor to the nation’s soccer heroes from Enugu extraction.

“I m impressed with what the Honorable minister of sports, Sunday Dare is doing to alleviate the suffering of some ex internationals who served the country. I give him kudos and charge him to do more and sustain the welfare scheme. There are so many ex internationals out there that need support and that is why I have also set up the 042 football legends association, a platform to rally support for Enugu based Ex internationals.” 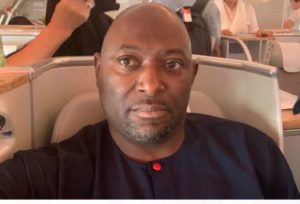 Iloenyosi noted that a good number of his colleagues, friends and team mates have already thrown their weight behind the initiative.

“As we speak, the likes of Dan Amokachi, Kanu Nwankwo, Ogenyi Onazi, CP GB Umar of Interpol and evening members of the Nigerian football supporters club have all endorsed 042 football legends association. The President of NFF Amaju Melvin Pinnick is also happy with the initiative which is coming from his SSA and has pledged to support it.”