By George Aluo
World number one footballer, Lionel Messi celebrated his Ballon D’Or title in style Saturday night as he scored a hat trick in Barcelona’s 5-2 drubbing of Mallorca in the La Liga.
Messi struck in the 17th, 41st and 83rd minute in a game which Barca dominated from start to finish. And all the three goals had a touch of class. Suarez and Griezman also found the back of the net.
Mallorca’s Ante Budimir was the other star of the night as his brace ensured Mallorca was not annihilated without any response.
Messi had before the tie displayed his Ballon D’Or shield, taking photographs with his kids right on the turf to the admiration of cheering Barca fans. 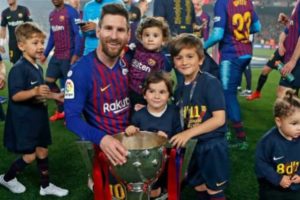 The 5-2 victory also saw the La Liga giants bounce back to the top of the league table ahead of the big El Classico clash with Real Madrid in 10 days.