Photo:  Pinnick, Akinwunmi and Dikko present signed Nigerian jersey to Dangote Group’s Alake for Aliko Dangote.
They are the reason the Nigeria Football Federation can beat its chest anywhere that it is 60-65% self –funded. Corporate Nigeria’s support for Nigerian Football has improved significantly over the years. And they all turned out gleefully and in full flow when the NFF decided to celebrate them in Lagos on Thursday night.
In south –west Ikoyi, upscale district of Lagos – the Centre of Excellence – there was an underpin of excellence to the planning and execution, and though not a night for speeches, the partners and sponsors affirmed their satisfaction and commitment to the relationship. Even those not in the boat yet gave words of their eagerness to jump aboard.
At the occasion were big wigs and representatives of AITEO Group (Official Optimum Partner of the NFF); Coca-Cola (Official Soft Drink and Co-Sponsor of the National Teams); Nigerian Breweries PLC (Star Lager – Official Alcoholic Drink of the Super Eagles; Amstel Malta – Official Malt Drink of the NFF and the National Teams); ZENITH International Bank PLC (Official Bank of the NFF); Tropical and General Investments (Big Bull – Official Rice of the Super Eagles); WAPIC Insurance PLC (Official Insurance Services Provider of the NFF and the National Teams); Cadbury Nigeria PLC (Tom Tom – Official Candy of the Super Eagles); Emzor Pharmaceuticals (Official Paracetamol of the NFF and the National Teams); FrieslandCampina WAMCO (Peak Milk – Official Milk of the Super Eagles); Simba Group (TVS: Official Motorycle and Tricycle Partner of the Super Eagles) and; Sports Radio Brila (Official Broadcast Station of the NFF). Overseas –based kits supplier NIKE and 1XBET (Official Partner) sent words of goodwill. 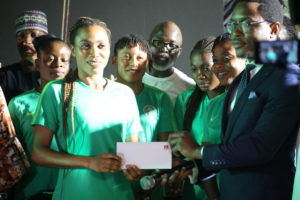