The eight clubs featuring in the on going Nigerian National League (NNL) Super Eight at the Enyimba Stadium, Aba are enjoying the lush green turf of the arena constructed by Nigerian indigenous firm, Monimichelle.
The teams believe the face of the nation’s domestic league would change if matches are played in such world class turfs, even as they commended Monimichelle for doing a good job. 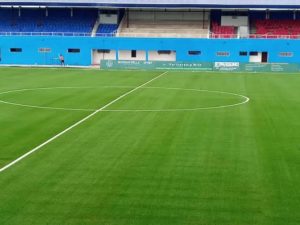 Head coach of Remo Stars, Fatai Osho who was literally on cloud nine after his side humiliated 3SC of Ibadan said even a pregnant woman would express herself on the Enyimba pitch.
“This is a turf that brings out the best in a player. Anybody that can’t play here is not a Footballer. Monimichelle has done a good job and I only pray he is given the opportunity to construct more of this kind of pitch.”
The Chief Coach of Insurance Monday Odigie also thumbed up the league organizers for taking the Super 8 to a stadium where the teams can express themselves.
“The Aba Stadium turf is Super and supports good football,” Odigie said after Insurance made a good start to their campaign with an easy 3-0 bashing of Delta Force.
Heartland FC Turkish technical adviser who side is preparing for the new NPFL season also rated the Enyimba Stadium turf high. He urged the nation’s football authorities to ensure more of such pitches are constructed in the country.