On Friday, 24th July 2020, the remains of Hon. Chidi Ofo Okenwa, Member of the Board of Nigeria Football Federation, Chairman of the Nigeria National League and Chairman of the Enugu State Football Association, was interred at his family compound, Ogonogo Eji by Akpugo in the Nkanu West Local Government Area of Enugu, amidst a torrent of tributes. It was the closure of the final chapter in the life of a most effervescent, ebullient and charismatic figure in the history of Nigerian Football.

Okenwa, a man of impact and substance, revered for his deep knowledge of the Statutes, Rules and Regulations governing all aspects of association football, breathed his last on Tuesday, 5th May 2020, after a brief illness. News of his demise was like a thunderbolt, leaving the Nigerian Football family crestfallen.

A simple, humble and devoted servant of the game, Okenwa pursued projects and tasks handed to him with uncommon gusto, infecting all around him with his enthusiasm, concerned only with successful execution of assignments. His preferred outcome for tasks was ‘executed’, not ‘excuses’. His famous mirth, good humour and readiness and willingness to assist the other man, borne out of character traits of humility and humanity, will ensure that though he is gone and his body interred, the image of the man will remain with us for much, much longer.

At the final rites of passage for the departed Okenwa on Friday, Chairman of Chairmen of Nigerian Football and Member of the NFF Board, Alhaji Ibrahim Gusau described Okenwa as “a hero and encyclopedia. His knowledge of the game was quite vast. He lived a good and virtuous life and will always be in our hearts.”

Chief Felix Anyansi-Agwu, Member of the NFF Board and Chairman of Enyimba FC, described Okenwa as a “pace-setter” and “innovator” with grassroots development programmes, promising that this would be sustained in the South-East region.

Mr. Lawrence Katken, chief operating officer of the Nigeria National League, said Okenwa, his former boss, was “a true professional and an embodiment of hard work.”

In a tribute delivered to the family, President of Nigeria Football Federation, Mr. Amaju Melvin Pinnick wrote: “Everyone connected in one way or the other with Nigerian Football realises that a big tree has fallen in our country’s game and this particular tree would be hard to replace. Okenwa started his education in football administration quite early and learnt so well that at the time he died, he was right there at the top of his game and in the vanguard of those who could be termed the chief custodians and oracles of the Statutes, Rules, Regulations and Conventions of association football within the Nigerian territory and beyond. 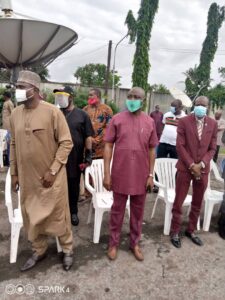 “His wide and deep knowledge of the game at all levels made him a stand-out Member of the Congress of Nigerian Football, long before he became a Member of the NFF Executive Committee, where he continued to play the same role with gusto, effervescence and elan. His death at this time has, without any gainsaying, robbed Nigerian Football of a colourful, capable and diligent administrator, whose enthusiasm was unmatched by many and whose sense of duty fiercely challenged senior colleagues, peers and youngsters.”