Former Golden Eaglets forward Otubanjo Yusuf said he was elated after scoring a brace on his debut for Armenian champions, FC Ararat-Armenia.

FC Ararat-Armenia signed the former Atletico Madrid starlet from the Austrian Bundesliga LASK Linz during the January Transfer Window and he was thrown into the thick of action in a high profile match on Monday.

“I can no longer hold the excitement of my first game for FC Ararat-Armenia,” the 27-year-old Otubanjo said.“ I am so happy to because we (Ararat Armenia) played a derby game on Monday against Ararat Yerevan which also has another Nigerian player , Haruna Lukman and we won 3-0.

“I am thankful to God for starting my first league game with a brace; I scored two goals and I can’t wait for the next game on Saturday ,”added Otubanjo who has been a consistent scorer with clutches of clubs. 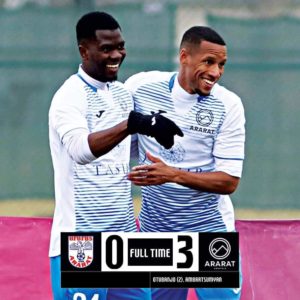 Few seasons ago, Otubanjo made scoring headlines with FC Blau-Weiß Linz in Austria where he remarkably scored 22 goals in 26 league appearances. He joined LASK in July 2018 and played 33 games for the club scoring six goals while providing seven assists.

Otubanjo was a member of the Golden Eaglets squad that reached the final of the 2009 FIFA U17 World Cup held in Nigeria. After the tournament, he was snapped up by Atletico Madrid before spells at Red Bull Salzburg, FC Pasching, FC Blau-Weiß Linz, Zilina, SC Altach and LASK Linz.