“I had little chances in the league last season and I had been waiting for new opportunities,” Otubanjo told newstap.com.ng.” Thank God, Ararat-Armenia showed up and I decide to join them because they are one of the best in Armenia.” 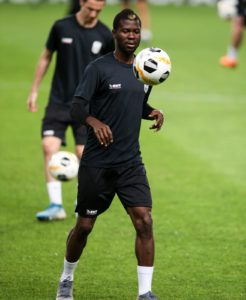 Few seasons ago, Otubanjo made scoring headlines with FC Blau-Weiß Linz in Austria where he remarkably scored 22 goals in 26 league appearances.

Though he is yet to produce such form due to spate of injuries in the intervening years, Otubanjo is upbeat that the good time is here again for him with the three- year old Yerevan-based side.

Otubanjo was a member of the Golden Eaglets squad that reached the final of the 2009 FIFA U17 World Cup held in Nigeria, playing as a substitute in two games against New Zealand in the second round and Switzerland in the Finals.

After the tournament, he was snapped up by Atletico Madrid before spells at Red Bull Salzburg, FC Pasching, FC Blau-Weiß Linz, Zilina, SC Altach and LASK Linz.