Photo: Cyclists set to pedal off at the Owan West Cycling tour in Sabongida Ora on Saturday
By George Aluo
Owan West local government area of Edo state is set to become the first local government area in the country to have a sports policy.
This much was disclosed over the weekend by the chairman of the local government, Hon Frank Ilaboya during the closing ceremony of the MASVI sponsored Owan West cycling tour that attracted nine states.
Ilaboya a veteran journalist cum football administrator said his council would next week launch what he called FACTT an acronym for Football, Athletics, Cycling and Table Tennis. 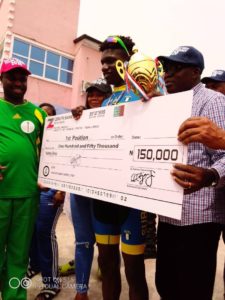 “As a local government we have identified the sports where we have comparative advantage and we are launching a sports policy where all these would be spelt out and the road map to achieve our goal. We would focus on tournaments for kids in primary school and junior secondary school between the ages of 6 and 13. In the next few years anybody looking for a kid footballer should come to Owan West same for anybody looking for a rising table tennis or Cyclist,” Ilaboya said.
The youthful council boss was full of praise for the Chief Executive Officer of MASVI Group Hon Ajayi and his wife Anita for sponsoring the maiden Owan West cycling meet which was a huge success.
“Hon Ajayi of MASVI has shown that he is a patriotic son of Owan West that is ready to invest in the youths of the area. We urge other wealthy sons and daughters of Owan West to emulate him as we strive to take our local government area to the next level in line with the vision of our pragmatic governor, Godwin Obaseki and his deputy Philip Shaibu.”