Thomas Bach has acknowledged that Tokyo 2020 would be cancelled should the Olympic Games not be held in 2021, while the International Olympic Committee (IOC) President confirmed that different scenarios are being considered over the potential impact of coronavirus on the postponed event.

Bach made the comments in an interview with the BBC, nearly two months after Tokyo 2020 and the IOC announced the postponement of the Games until next year.

The rescheduled Olympic Games are due to take place from July 23 to August 8 in 2021, with the Paralympic Games following from August 24 to September 5.

Concerns remain over whether the multi-sport events will be able to take place due to the ongoing global health crisis, with more than five million coronavirus cases and 330,000 deaths now reported since the outbreak began.

Opinions have differed on whether a vaccine would be required for Tokyo 2020 to take place, with Japan Medical Association President Yoshitake Yokokura suggesting last month it would be hard to host the Games without this in place.

Bach has repeatedly sought to quell “speculation”, with the IOC President telling the BBC the organisation is relying on experts.

“For this question, we are relying on the advice of the World Health Organization,” he said.

“We have established one principle: to organise these Games in a safe environment for all the participants.

“Nobody knows what the world will look like in one year, in two months.

Bach added that he understood Japanese Prime Minister Shinzō Abe’s assessment that next year could be the “last option” to stage the Games.

“Quite frankly, I have some understanding for this, because you cannot forever employ 3,000, or 5,000, people in an Organising Committee,” said Bach. 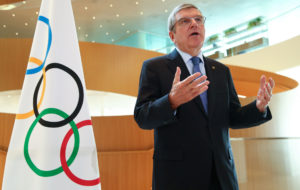 “You cannot every year change the entire sports schedule worldwide of all the major federations.

“You cannot have the athletes being in uncertainty.

“You cannot have so much overlapping with a future Olympic Games, so I have some understanding for this approach by our Japanese partners.

“We have to be prepared for different scenarios.

“There is the clear commitment to having these Games in July next year.”

Bach said scenarios were being assessed regarding health measures, telling NBC Sports in a separate interview that the IOC needed to consider whether rules might be necessary to ensure access to Japan next year.

This could potentially involve quarantines for athletes and determining how many people would have access to venues.

Bach said these scenarios were part of the “mammoth task” of reorganising the Games, adding that decisions would be taken at an “appropriate time” after advice from experts.

The IOC President stressed the organisation did not want to hold the Games behind closed doors.

A total of $650 million (£535 million/€600 million) was set aside by the IOC last week to assist the organisation of the re-arranged Games, although Tokyo 2020 are still assessing costs related to the postponement.

This fund could be used to provide loans and advance payments on revenue shares from the postponed Tokyo 2020.

Donations could also be covered by the scheme and support will “come in different forms and will be decided after an assessment of needs and on a case-by-case basis”.

Association of Summer Olympic International Federations executive director Andrew Ryan told insidethegames that the money eligible IFs receive from the IOC package will be “deducted from revenue shares at the end of next year.”