By George Aluo
President of top Moroccan club Hossania Agadir, Habib Sidinou was full of praise for Monimichelle the firm that constructed the Enyimba Stadium turf on Sunday when his club played out a 1-1 draw with Enyimba in the CAF Confederation Cup.
Sidinou who was impressed with the Enyimba Stadium pitch said he was happy to see a Nigerian surface that supported good football declaring that it is good for African football.
He noted that they knew the field won’t be a problem when they trained at the Enyimba Stadium on the eve of the match.
“We trained at the stadium on Saturday and we were impressed with what we saw. Good turf that supports good football. The ball behavior on the Enyimba turf was just like that of natural turf. Back home in Agadir we play on natural turf, but here in Aba, the turf is artificial but very good artificial. The important thing is if you have natural turf let it be excellent and if it artificial let it be the best like what you have here in Aba. We need something like this every where in Africa for African football to grow.” 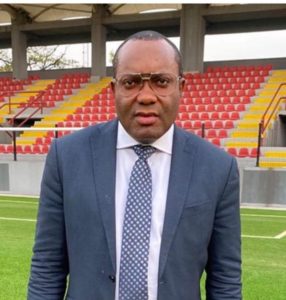 Sidinou was also full of praise for the chairman of Enyimba, Felix Anyansi Agwu thumbing him up for ensuring that his club enjoyed the best of hospitality in Aba.
“We are leaving Aba very happy. We were well received…the people are friendly and Enyimba boss Anyansi is a nice gentleman. I wish his club well. Hopefully both of us will progress from the group and possibly meet again in the final,” Sidinou said.
Enyimba are second in the group with seven points behind Agadir who are on top with 11 points.
Enyimba would in their last match of the group face Ivorian side San Pedro away in Abdijan while Agadir play host to Paradou of Algeria.
Paradou are third with five points, while San Pedro are at the bottom of the group with three points. Enyimba would need only a draw in Abdijan to join Agadir in the quarterfinals.