By George Aluo
The USA based Grand patron of ex Rangers, Chief Benson Ejindu (Ezeomeogo) has given account of his stewardship on the steps he took to ensure the club’s former captain Christian Chukwu got help when he needed medical attention early last year.
Ejindu in a press release stated that a total of $4,784 was raised from GoFundMe when he launched the Save Chukwu campaign. The target then, according to him was to rake in $50,000.
He pointed out that the GoFundMe campaign was stopped when Nigerian business mogul and philanthropist Femi Otedola stepped in and decided to bankroll Chukwu’s medical bills.
He (Ejindu) stressed that Chukwu who has since bounced back to good health after undergoing treatment in a London hospital has since been given the money raised from the GoFundMe campaign, while a little portion of the fund was used to procure blood pressure monitors and diabetic drugs for Chukwu and other ex Rangers players.
Ejindu in the press statement was full of praise for Enugu state governor, Rt. Hon. Ifeanyi Ugwuanyi and Femi Otedola for bailing Chukwu out.
The release stated in part..”Special thanks to Chief Femi Otedola and all the people who heard the clarion call and responded with donations, prayers and words of encouragement. I have to thank the Enugu State Governor, His Excellency, Rt. Hon. Ifeanyi Ugwuanyi for stepping up the moment he got the information that Chairman Christian Chukwu was in the Hospital. The Almighty God that answered Chairman Christian Chukwu’s prayers will also meet each and every one of you at your points of need.” 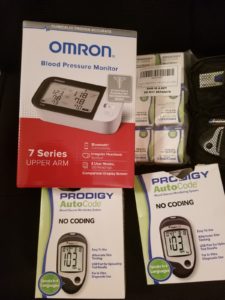 Continuing Ejindu said…I have fulfilled the promise I made during my call for help regarding money raised in excess of the medicall bills. Since Chief Femi Otedola took care of all the medical bills in the United Kingdom, the Naira equivalent of the total sum of $4,784 (less GoFundMe fees) has been disbursed to Christian Chukwu with a small portion of that money spent on blood pressure monitors and Diabetic Supplies for Chairman Christian Chukwu and other Ex Enugu Rangers players. I would like for everyone of them to check their BPs and Sugar Levels at least every month during their monthly meetings. I will continue to send the Test Strips and Lancets, whenever supplies go down. We hope that the Nigerian Football Federation will step up and take care of those who represented the country. On this note, I am closing this campaign with thanks to God for His abundant grace and mercy.”